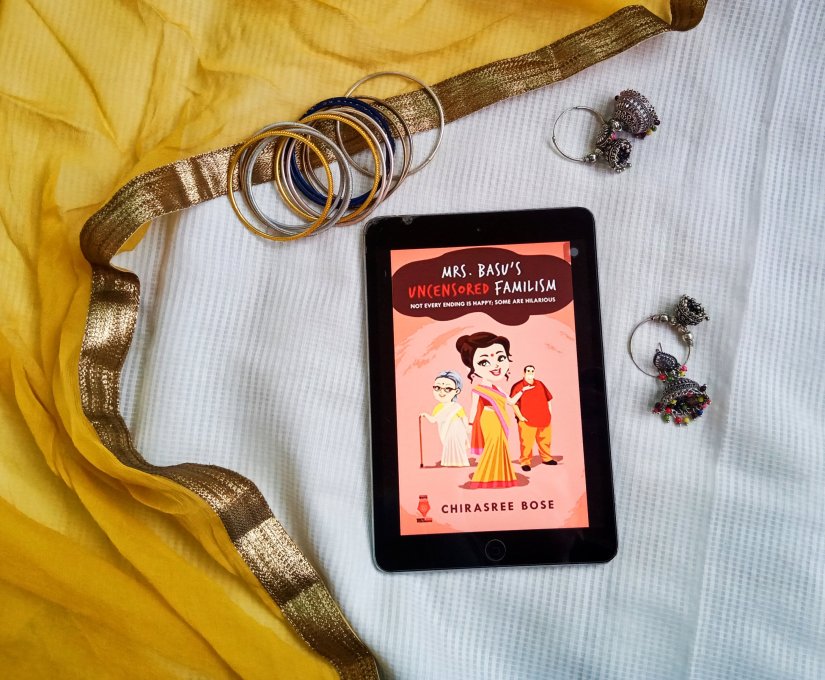 Mrs. Arpita Basu, the only daughter-in-law of Basu family, is here to tell you a story that will leave your stomach hurting with chuckles and laughter. A Chudail to her prim mother-in-law, inexistent to the devil father-in-law, a damped down bomb to her once best friend Naveena and well, nothing whatsoever to her own husband Akash, the 23-year-old finds herself questioning the very concept of familism as her six months of tumultuous married life is hit with unanswerable questions sprouting every now and then in her head.
Speaking of head, what do you think is its importance in Mrs. Basu’s life? Oh boy, you’re in for a surprise! Because the quirks of their tongue-in-cheek relationship is bound to make you split your sides.
However, in a split second Mrs. Basu’s life goes kaput as her dark past comes knocking at the door. While she struggles to keep it at bay, her husband leaves her side with no promise of coming back ever.
Is it mere coincidence that her past holds a connection to the disappearance of her husband?
Or, is it what Mrs. Basu deserves for all she did in the past?
This chapter of her life will unravel the mysteries of the present, all the knots of the past and the road to the future. Of course, in the most hilarious way possible.

“Mrs Basu’s uncensored familism” is the unconventional tale of finding love and acceptance perfectly moulded with age old battle of feminism Vs familism with showcasing the atrocities women has to face in every step of her life. The fact that it brings a still niche subject like homosexuality is one of its strength.
The story depicts the fair share of stereotypes to tell modern and relevant story.

The story start off with the traditional saas -bahu – housemaid quintessential family drama, where Mrs Arpita Basu struggles between her inner feminism and emotional familism. Mrs Basu is trapped in the arrange marriage setup results of her kneeling in front of familism, killing feminism and emotional blackmail by her father and sister. She struggles everyday there, with her saas taunts, nosy housemaid and neighbors, ignorant husband are no help. Only helpful think is her humour which allows her to laugh everything off.
The book step by step portrays all the struggles women has to face in the society and modern relevant things which are considers taboo.
From saas taunting bahu about her failure in seducing her ignorant and non interested husband, emotional atrocities from one owns father and sister, father struggles in marrying off the daughter, child molestation by family member, homosexuality and most humorous part womens herself boosting male ego by mistreating other women no matter her age, reflecting the ages old saying ‘Aurat hi aurat ki dushmann hai’.

Every character and layout is so cleverly written using the patriarchal conditioning but inherent empathy as a women to comment on everything wrong with society especially when it’s comes to taboo topics like homosexuality and child molested by family member.
It’s nice to read this book in one day with appreciating new on stakes, subtle humour and some not so subtle jokes as well. The base of book does drop in the middle somewhere, some redemption scene last too long like the pub scene but engaging, insightful and very moving climax makes up for it. The writing isn’t the top grade but this book has its heart in the right place and sometimes that’s all that really matters.